I have never paid for cable, or satellite, ever. When I lived in apartments, I relied on bunny ears or the cable jack as antenna trick, and my last two apartments had cable because it never actually went away when the previous tenants moved out and cancelled it (which still makes me wonder if the cable companies just leave it on assuming the next tenants will be calling to hook up service, but that was also wow, a dozen years ago that I was moving into an apartment for the last time…) When we bought our house, we relied on antenna and a netflix subscription, which worked great. In 2008, I heard about the Roku through my various tech blogs that I keep up on, and I was instantly enamored — this was the perfect solution. Dave didn’t agree, but my friend Jamie did, and she bought one for her husband, and they loved it. a few months later, we were installing our Roku, and it’s only gotten better. I have probably ‘sold’ a dozen Rokus in the last five years to others who want something easier for streaming, and they have all been just as happy with the purchase as I have.

What does a Roku do? It streams content from a variety of sources, most notably, Netflix, Amazon, Hulu+, Pandora, and others. They also have a ton of private channels, but the ones we use most are Netflix, Pandora, and Amazon. We’ve used the NASA channel to watch various launches and spacewalks, etc, too. If you DO have cable, you can access some of your channels via the Roku, by providing your account info from your cable provider. There are also games available to play on it, but it would never suffice for a heavy gamer.

What doesn’t it do? It doesn’t record programs like a DVR would. You can’t download them to watch later, it is solely for streaming. It doesn’t connect straight to a web browser, or to YouTube.

Our original Roku was a fixture in our living room until we got a new tv a few years ago, a Samsung that came free with a streaming stick. When we got that, we relocated the Roku upstairs, and relied on the stick for Netflix and Pandora. It also will stream Amazon and other channels, but the interface is really clunky — for instance, Netflix is one panel, but you have to go to a totally different area to find Amazon, and in Amazon you can’t search easily.  Recently, our streaming stick has gotten more and more fiddly, so we brought the Roku back downstairs, and even though it is now five years old, it is still a better experience than our streaming stick (although the stick was nice in that it just plugged into the back of the tv and used the same remote.)

What do we watch? A LOT. On Netflix, my kids like seeing the usual kids fare – Jake and the Neverland Pirates, Good Luck, Charlie, Caillou, etc. They also like movie nights, when we stream movies like Lilo & Stitch or Mulan. My husband loves horror movies, and there are plenty of those. I like documentaries and we all like comedy, so those show up a lot, too. On Amazon Prime, there are shows that aren’t available on Netflix. For the kids, iCarly and Dora and the original Mr Roger’s Neighborhood, and for me, there are a lot of HGTV shows to see. Pandora is great, especially during the holidays, I’ve found.

What don’t we watch? We have a giant antenna mounted in our garage and connected to our tvs with coax, so we get our local stations in HD, and use that for network stuff. If you don’t have good reception for the networks, and want local news, etc, you’d need a cable package of some type. We also aren’t huge sports fans – we love watching the Sox on tv, but we are limited to what shows on Fox, and we are okay with that. There is an MLBtv package one can buy, but in Maine, all Sox games are blacked out because they are considered ‘local.’ If your favorite sports team is somewhere else, then MLBtv might be a great option for you. (There are similar premium services for other sports as well.)

While our original just won’t die, I am really hoping to next own a Roku3. Why the 3? So many reasons.

First, the original’s processor means that you can’t use all of the services that are available for Roku now, and the storage on the Roku has quadrupled. Because ours is an older one, we can’t add certain channels, like PBS and PBS Kids, for lack of processing power. The Roku3 fixes that. (For comparison, our original is 400mhz, and the 3 is “5x faster [than [the last processor, which was 600 mhz, which means it’s almost 8x faster than our original].”

Third, the integrated search option seems really great — I use a website and app to look to see if a certain show or movie is streamable on any of my services ( www.canistream.it ) which is great, but having it on screen would be cool, too. It also would take advantage of the Netflix profiles, which would mean our suggestions and recently watched wouldn’t be a bizarre-looking mix of horror flicks and kids shows.

On top of all that, it’s a lot smaller.

Here’s a photo  from Amazon of my Roku, and one from TechHive of the Roku3: 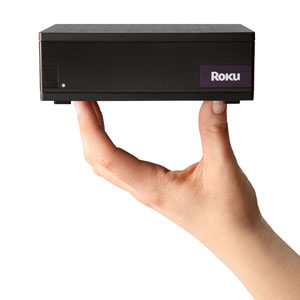 What does all this cost? Well, on Amazon right now the Roku3 is 94.99, which is $5 less than the regular price of $99. To use Netflix and Amazon Prime streaming, we pay 7.99/month and 79.00/year respectively. That works out to less than $15/month (and that’s if I ONLY used my Prime for streaming, and not for the free 2 day shipping, and other Prime deals, which I use all the time.) which is much less than cable. We also need to have high speed internet, which is about $50/month, but we’d pay that anyway. Using the camelcamelcamel service, I can see that the lowest the Roku3 has been on Amazon is $84.99. (I wouldn’t be surprised to see another price drop during the holidays, either.)

There are other options in the set top box arena, and most people that know me are surprised to hear that I don’t use the AppleTV, since I use the AppleEverythingElse. I do have an AppleTV for work, that I use for the airplay function, as that’s what Maine schools are using in their new MLTI setups, so I have played with that before. AppleTV doesn’t have the Amazon Prime offerings, unless you watch on an iPad and stream to the tv via airplay, which is another cumbersome step. For the same price, I would much rather have the Roku. The Google Chromecast is a new offering, and at $35 the cheapest, but it still involves streaming from a device to a tv, and I like the seamless approach of the Roku better.

Wife to one great guy, mother to two great girls, in a career I love and striving to be a better person each day.